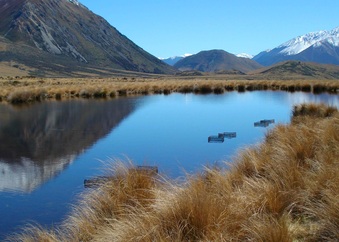 Predator exclusion cages in a New Zealand temporary pond
Environmental gradients of physical stress and disturbance are found in nearly every ecosystem. They are also excellent model systems for understanding how abiotic conditions alter the role that species interactions play in maintaining diversity and regulating biomass. Our group has been studying the mechanisms underlying the response of freshwater communities to flooding and drying. For example, research in wetlands of New Zealand, Colorado and Greenland has been unravelling the interactive effects of drying and predation on the benthic communities. Our research revealed that disturbance from wetland drying altered the strength of predation and space and time, which promoted species coexistence within and among habitats. Surprisingly, in New Zealand wetlands, disturbance actually strengthened top-down control of prey biomass. Further experiments indicated the mechanisms behind this result was the suppression of invertebrate predator foraging by fish in permanent ponds, combined with the simplification of food webs that enabled strong interactions in temporary ponds.

Current research on wetland drying gradients is investigating how variation in the predictability of wetland drying regimes among different biogeographic regions influences community assembly. Graduate student Jack McLachlan is testing these ideas in among most predictable of wetland hydrological regimes - the twice daily drying and filling of freshwater tidal marshes.

We are also working with collaborators at the University of Canterbury in analyzing a series of experiments to understand how ecosystem size and disturbance influence the structure and stability of stream communities. In addition, graduate student Jess Haghkerdar has been conducting experiments in streams and pond mesocoms to understand how succession following disturbances alters community resistance and resilience to new perturbations. 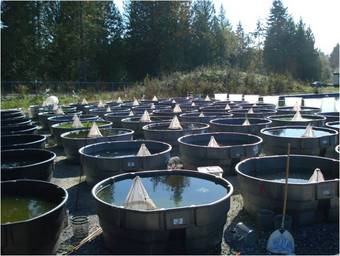 Cattle tanks at UBC used for our warming experiments
Predicting and understanding the response of ecosystems to global change is one of the most pressing challenges facing ecology. In particular, the extent to which environmental changes occurring at local, regional and global scales interact is poorly understood but critical to understanding the changes taking place in ecosystems. My collaborators and I have just completed a large pond mesocosm experiment that aimed to tease apart the interactive effects of climate warming, eutrophication and changes in top predators. Our research revealed often synergistic effects of these perturbations on population, food web, ecosystem and cross-ecosystem level responses. This indicates that the effects of global changes such as warming will likely depend on local conditions of resource supply and food-web structure.

I am also working with a diverse team of ecologists as part of an NCEAS and Canadian Institute of Ecology and Evolution-funded working group in developing and testing theory for the temperature-dependence of species interactions. Our goal is to develop a predictive framework that explicitly links theoretical and empirical approaches to understanding ecosystem responses to climate change. 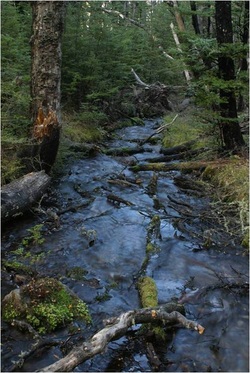 A forested Canterbury stream. Photo: Angus McIntosh
Detritus-based foods webs, such as headwater streams, challenge many ecological principles as detritus subsidies offset traditional feedbacks between consumers and primary producers. In many aquatic food webs, macroinvertebrates are largely responsible for the uptake of this detritus. Yet, the role of interactions such as predation and competition in mediating detritus processing by consumers is poorly understood. We have been working with collaborators in New Zealand and Colorado to address this question in both headwater streams and alpine ponds. We found that detritivore populations can be subject to strong density-dependence and top-down control, which is counter-intuitive as detritus habitats are typically associated with an abundance of resources and refugia from predators. Furthermore, these interactions can have cascading effects on leaf breakdown and the release of detritus-bound nutrients.

Our current work in this area is investigating the consequences of foundation tree losses on freshwater ecosystems. We are using a combination of experimental and paleoecological approaches to understand the effects of past and present hemlock decline on freshwater ecosystems. Honors student Eric Veitch expanded this research to consider how forest changes resulting from spruce budworm outbreaks influence the functional role of stream detritivores. Eric's experiments showed that a shift in leaf litter quality that occurs when spruce & fir forests are replaced by maple & beech altered a suite of ecosystem processes including detritivore secondary production, detritus decomposition, and the release of detritus-sourced nutrients to the water column. 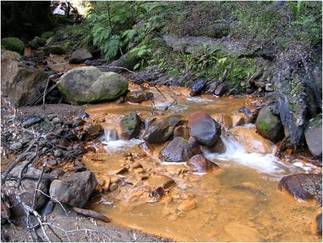 Orange iron oxide precipitate in a mine-affected stream
Some of the strongest environmental gradients in landscapes occur when human activities introduce novel stresses into ecosystems. For example, coal mines are often associated with leaching of acidified water with high concentrations of toxic heavy metals.  In New Zealand, this human-induced stress acts upon a complex landscape of naturally acidic streams draining podocarp forests and peatlands, and circum-neutral streams draining other land-types. We have found that adaptation to natural acidity buffers New Zealand stream fauna to pH changes associated with mining, but novel gradients of toxic heavy metals and severe acidity (pH < 4.0) substantially impacts communities.

Our research in Maine is focussing on gradients of chloride concentration in streams from the application of road salt. Experiments by honors student Cara Rudnicki revealed that sub-lethal concentrations of chloride can alter feeding relationships between macroinvertebrates and their algae and detritus resources, potentially altering the transfer of basal resources into food webs.